Vector performance, also known as vector mode, is mainly used for cutting and single line engraving and marking. In this test, 12 graphic elements were developed to test different aspects of vector performance when laser material processing. Settings were adjusted on each laser system in the comparison to maximize performance while achieving comparable and acceptable quality for the PLS6.150D (ULS) and two competitor systems, System E and System T.

Each graphic element was tested to determine the most efficient settings that resulted in reasonable quality. Quality was defined by two parameters – how accurately the motion kept to the intended path and uniform marking across the graphic. A variety of curves, circles, squares and lines were used to determine system performance across different geometries. The overall graphic was processed on a 24”x12” sheet of anodized aluminum.

Testing for each element was initially done at maximum speed and acceleration. For some graphic elements this resulted in acceptable quality, however other elements required adjustments to system settings. Since each system has different settings to adjust quality, a consistent methodology was used to find the optimum settings for each system. Each Graphic element was adjusted independently of the others so that each element was run at the maximum possible performance level that achieved acceptable quality.

All settings were adjusted in accordance with the user manual provided with the respective system.

The time and rank of each system for a specific graphic element is as follows. All times were measured from start of processing the design graphic until completion of the graphic. Movement from a “home” position and return was not included. 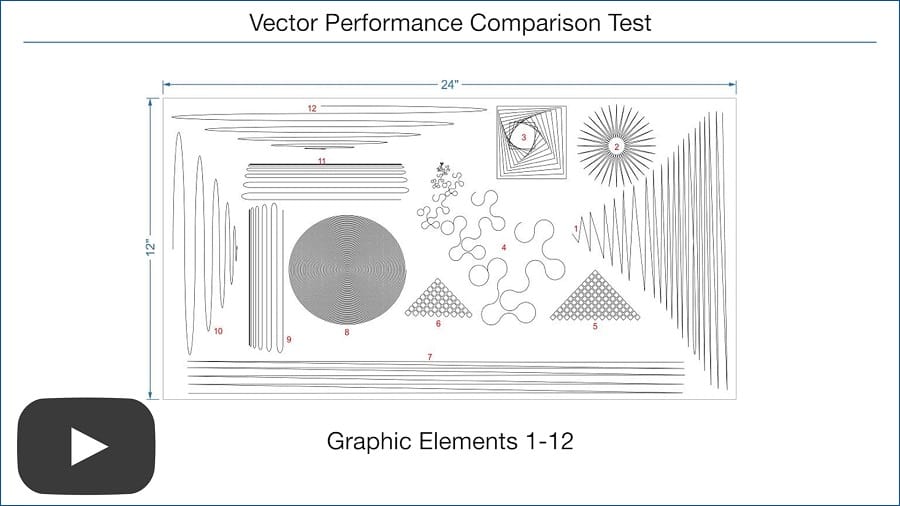 Video showing all elements of the PLS6.150D (ULS) running the test scenarios against System E and System T

The PLS6.150D system performed well across the test graphics. A sophisticated path planner that optimizes acceleration and speed independently and dynamically along with the ability to scale acceleration independently from velocity allows the system to be efficient across a variety of graphics.

System T falls to third behind both System E and PLS6.150D. The key issues which impacted the performance of the system were lack of a setting to control acceleration separately from speed, combined with path planning around curves, which leads to less than optimal performance. The only control available to improve quality is overall system speed which must be drastically reduced to maintain quality when smaller curves are present in the graphic.

These results illustrate one major conclusion: type of motor, stepper or servo, is an irrelevant consideration when comparing laser systems for optimal performance. The ULS laser system employs stepper motors and both competitor systems use servo motors. For overall vector performance, the ULS laser system is the clear winner. Both types of motor technology are equally capable of excellent performance. The difference does not lie in what motor type is used or its top speed capability, but rather in the design and control of the overall beam positioning system. ULS laser systems use extremely light motion systems with custom linear rails designed specifically for laser processing. Lightweight aerospace materials are used throughout as opposed to the very heavy off-the-shelf solid steel linear bearings used on other systems. This custom technology combined with sophisticated path planning software allows ULS laser systems to outperform the competition on real world vector applications using reliable digital stepper motors.